HUB MARKETS – Hub markets are the large regional refining centers that tend to act as swing capacity for the global market and the location for most spot market trade in refined products. 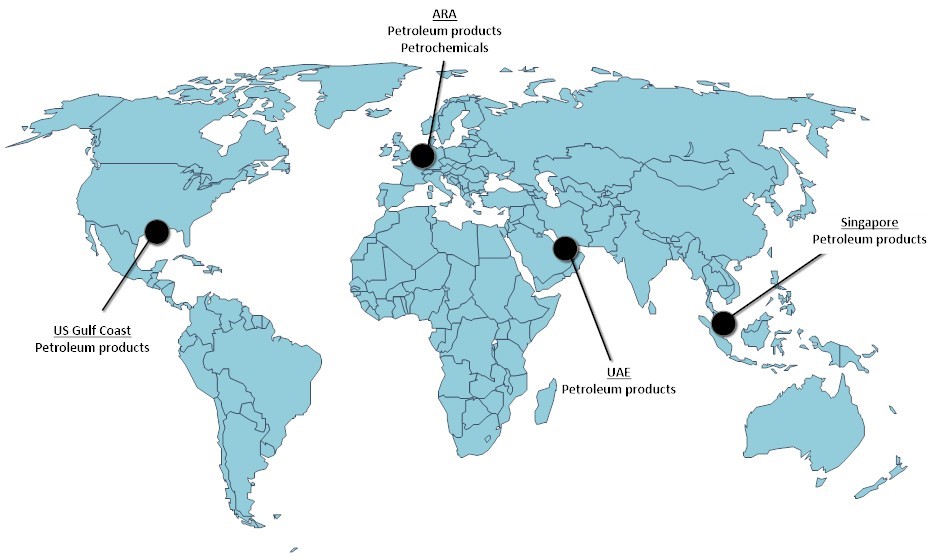 The three main hub markets are:

ARA refers to the ports of Amsterdam, Rotterdam, and Antwerp in the Northwest Europe refining hub market.

Spot transactions for refined products in these ports are commonly used as indicators for the Northwest Europe market overall, and are thus called “ARA basis.”

These ports are used as a reference because they all have deep, active trading markets and are close enough to each other to be considered interchangeable.

The coastal refineries in Northwest Europe are swing suppliers for the broader European market as well as major product exporters, especially of gasoline.

The Northwest Europe spot market is centered around the ports of Amsterdam, Rotterdam, and Antwerp, typically referred to as ARA. The market is active in both ocean-going cargoes and river barges.

The US Gulf Coast is one of the major refining supply centers and spot market trading hubs.

The Gulf Coast is typically defined to include the refineries located along the US coast of the Gulf of Mexico running from southern Texas to southern Alabama. This includes refining clusters in Corpus Christi (TX), Houston (TX), Beaumont/Port Arthur (TX), Lake Charles (LA), along the Mississippi River of Louisiana, and on the coast of Mississippi and Alabama.

The Gulf Coast spot trading market generally includes trading of crude and oil products in the ports of Houston, Corpus Christi, and Beaumont/Port Arthur. This includes transactions of tanker and barge cargoes on the water and transactions at the injection point of key product pipelines such as Colonial, Plantation, and Explorer.

SINGAPORE– Singapore is a major refining center in Asia and main spot market trading hub for the region.

Singapore has several large, complex refineries that give it capacity well beyond the needs for the small local market. This capacity acts as swing capacity for the rest of Asia.

The spot market in Singapore is deep and active due to the high volume of refined products exported and the number of players producing and buying refined product cargoes.

In the world, there are considered to be four major oil trading hubs: ARA, Houston, Singapore, Fujairah. These four port areas have their own different identity and their own local trading dynamics.  For investment intensity in these locations comparison purposes in ARA, we have split ARA in only Rotterdam and Antwerp.

When we divided total storage capacity with the number of terminals we can calculate the average capacity per terminal. Biggest average tank size is in Singapore (0.73Mcbm), followed by Rotterdam (0.62Mcbm), Fujairah (0.55Mcbm), Houston (0.47Mcbm) and Antwerp (0.32Mcbm).

This calculation says something about the local storage footprint and the port’s specialty. For instance, Singapore is an Asian bunker hub which facilitates fuel oil storage. There are a number of big underground caverns there. Antwerp is focused on specialty chemical storage which need smaller tank sizes and lower average storage capacity per terminal.

For these five port areas, it is believed that around 22 expansions projects (existing greenfield, brownfield and planned additions) will add almost 8Mcbm to current capacity. Fujairah has 7 projects, followed by Houston (6), Antwerp (5), Singapore (3) and Rotterdam. Looking at the growth per capacity, port that shows the largest storage additions is Fujairah (29%), Antwerp (11%), Houston (9%), Rotterdam (7%) and Singapore (5%).

The conclusion of these statistics is that the major oil trading hubs have different strengths, serve a different purpose and show their own investment dynamics.

Rotterdam – A well established European trading hub which acts as both an arrival and distribution point for oil and gas as well as one of the largest industrial and logistic clusters, ensures that various sources of energy commodities converge. As a European gateway for oil and gas transition, Rotterdam provides a perfect location with its economy of scale and reliable services.

Thanks to the half-century experience of well-developed knowledge in the sector, Rotterdam has laid foundations for game-changing innovations and research and development in the oil and gas sector.

The total length of transmission network in Netherlands is around 12,050 kilometers and as of 2015, overall gas storage capacities reached 13.3 billion cubic meters (bcm). Gas storage facilities are dispersed in different parts of the country in places like Norg, Alkmar, Epe, Bergermeer, Grijpskerk.

According to 2015 figures provided by the Dutch Ministry of Economic Affairs of the Energy Market Directorate, the total volume of exports reached 58 bcm. While the Netherlands consumed 31.8 bcm of gas, 43 bcm was produced in 2015, according to BP’s statistical review of world energy 2016.

According to the Dutch Energy Market Directorate’s projections, the overall production of the Groningen field in 2020 is expected to be 39 bcm while this number precipitates a decline in volumes to 26 bcm by 2025 and falling off to 12 bcm in 2030. However, it should be noted that large volumes of gas reserves in storage are not a requirement for an energy hub but rather there is a vital need to have great volumes of gas flowing to the hub, which has been the case for Baumgarten in Austria (see my previous analysis).

Rotterdam provides optimum grounds for an energy hub with its liberalized market and number of active players in the gas sector. Combined with a high transmission network supported with underground storage reservoirs, and with the largest Title Transfer Facility (TFF), which offers the opportunity to transfer gas that is already in the system, as well as a well-functioning APX-Endex gas exchange, Rotterdam is a pioneering gas trading center.

As a well-established gas trading hub, Rotterdam is linked to the global gas market and operates as both producer and trader. Currently, many of the gas consuming countries in Northwestern Europe have been benefiting from TTF as a virtual trading hub and a benchmark that allows gas to be transferred to another party – a network that outpaces other trading centers. The system ensures the balance between supply and demand, and buyers can take delivery at any time while the vendors can supply gas at any point to the network. An advanced level of networking and transfer facilities is a must to provide safe and secure supply to the end user.

Additionally, the formation of an APX-Endex gas exchange for a secure, transparent electronic trading environment facilitates gas trading on the sport market and in future markets. The establishment of this exchange has contributed to the integration of the gas market in the EU.

The establishment of a virtual trading point, created through APX-Endex and the TFF as benchmarks for a gas trading hub, should benefit other countries which are seeking to become genuine energy trading hubs and integrated, consolidated energy exchanges. Therefore the development of an integrated and liberalized gas market that ensures a balance between supply and demand and functions in line with other major gas hubs in Europe, would help countries that have ambitious plans in becoming an energy trading hub. By working towards having these optimal market conditions, a country’s position can be elevated from solely serving as a transit point for gas and oil. 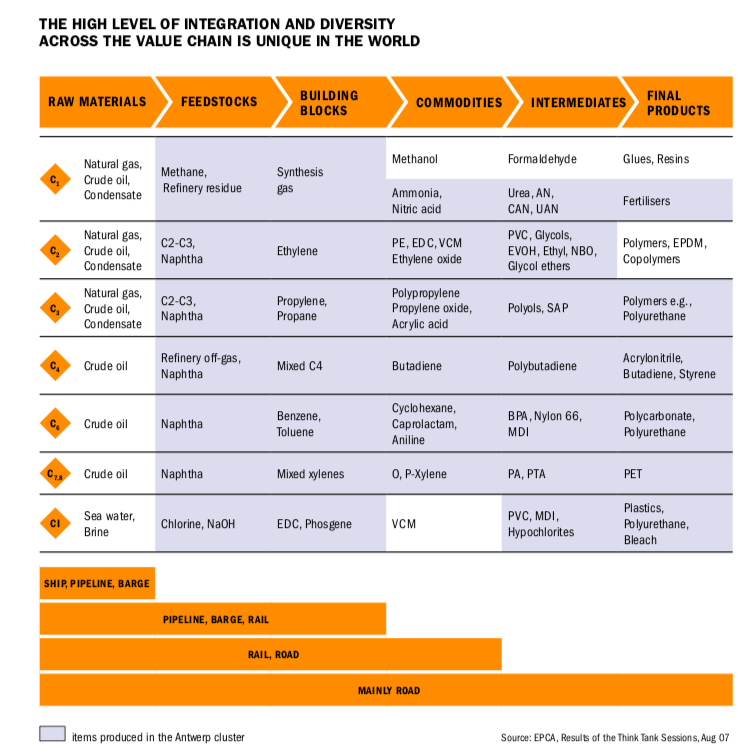 Indian Gas Exchange (IGX) has recently launched its first online delivery-based gas trading platform for its customers. The new platform will allow buyers and sellers to trade spot and future contracts for imported natural gas at three physical hubs: Dahej and Hazira in Gujarat and Odoru in Andhra Pradesh. Exhibit 1 shows the existing natural gas pipelines in India as well as those under construction.

Gas trading hubs are well-advanced and mature in northwest Europe and North America but have just starting in emerging markets. North American gas prices reflect gas supply-demand balances through gas-on-gas competition while European prices are linked both to oil prices and gas hub prices. European hub which started in the 2000s and can provide valuable insights for IGX’s natural gas trading platform. The European hub experience highlights market liberalization and the transition of gas pricing to a mechanism that drives competitive markets and allows effective functioning of natural gas hubs. It also signifies the role of government regulations in providing a healthy competitive environment needed for hub development.

IGX’s move will help India in preparing to change its dominant oil indexed long-term contracts to more flexible hub (spot) indexed contracts for its LNG and pipeline gas imports. The online natural gas trading platform will also stimulate India’s energy ties with countries like the U.S. and reduce its dependency on volatile regions such as Middle East. The recent deal between ExxonMobil and Indian Oil Corporation to deliver natural gas in containers to Indian cities outside the pipeline network is one example that demonstrates this opportunity.

In conclusion, the recent online gas trading platform from IGX is a step in the right direction that will eventually grow India’s regional demand and thereby increase its ability to bargain from a position of strength for lower gas prices. It will simultaneously drive domestic and foreign investment in natural gas infrastructure and contribute in its overall economic growth.

THE HOTTEST TERMINAL LOCATIONS OF 2020

IN THE WORLD OF INTERNATIONAL TANK STORAGE, THOUSANDS OF TERMINALS GIVE ACCESS TO COMMERCIAL STORAGE. THESE TERMINALS ARE LOCATED ALL OVER THE WORLD. FROM LARGE TANK FARMS IN OIL TRADING HUBS IN ARA, USGC, FUJAIRAH AND SINGAPORE TO SMALL DEPOTS ON GUAM OR GREENLAND.

The tank storage sector is not a static industry but a dynamic one which grows every year. It is interesting to find out which regions have the most investments planned or are currently building new additions.

In picture can be seen where the largest concentrations of tank terminals are.

Analyzing this list some remarkable conclusion can be taken:

-The Middle East will show the strongest growth rate with 84% in 2020 as capacity in this regions grows from 50.8Mcbm to 93.3Mcbm;

-Africa will leapfrog South America and take position 5. This continent shows a growth rate of 12%. Storage capacity increases from 43.6Mcbm to 48.9Mcbm.

-Europe will grow by 4% till 2020 and is the slowest growing region of all the 7 regions. Capacity in this region grows from 235Mcb to 244Mcbm

Although, looking at regions is sort of looking at it as from a macro-level perspective, we can well say that the Middle East will be the hottest tank terminal location in 2020. There are some interesting locations in the Middle East that have a substantial part in the additions in this region.

In Oman storage of oil liquids is concentrated around the ports of Salalah, around Oman’s capital Muscat and Sohar’s industrial area. Oman’s government owned investment company OOC, Oman Oil Company announced a major investment in 2012 on building a massive 31Mcbm crude storage facility in Ras Markaz. Some 200 tanks will be added. Estimates are that this terminal will be operational as from June 2019. With this investment Oman is trying to develop its position as an important global trading and storage hub.

Roughly said, Iraq has storage facilities in its oil fields in the North, around Kirkuk, Al Anbar and Erbil and in the South, around Basrah. Most of these terminals are controlled by the Ministry of Oil of the Republic of Iraq. Government-owned South Oil Company will add 2.78Mcbm of crude capacity in Al Zubair and another 0.464Mcbm in Fao. For the first addition applies that some 489 crude tanks will be built. December 2019 has been pointed as data of operation. For the latter, applies that 5 tanks will be built and this expansion is planned to become operational in December 2020.

In Iran, storage facilities are controlled by state-owned Iranian Oil Terminals CO. These terminals are mostly located at the Persian Gulf and the gulf of Oman, connected with each-other by the infamous Strait of Hormuz. Not in the 2019 and 2020 numbers but definitely worth mentioning is the 10Mcbm crude addition in Jask. Jask is peninsula that runs into the Gulf of Oman. The Jask Oil Terminal will include 20 tanks with floating roofs. he terminal will also include loading and unloading wharves, offshore facilities including three single-point mooring (SPM), and other infrastructure for import/export oil. Estimates are that this addition will be active in December 2021.