The global ethanol market size was valued at USD 89.1 billion in 2019 and is anticipated to register a compound annual growth rate (CAGR) of 4.8% from 2020 to 2027. The demand for the product is driven by growing usage of the product as a biofuel. The rising consumption of alcoholic beverages is another major factor supporting market growth. Ethanol can be manufactured by both natural as well as petrochemical feedstocks. In the natural process, natural sugars are fermented in the presence of yeast. Ethylene production is increasing owing to the rise in shale gas production. As oil output reduces and new ethylene capacities come online the market is expected to overstock with ethylene, which is expected to bring stagnancy in production of ethanol. 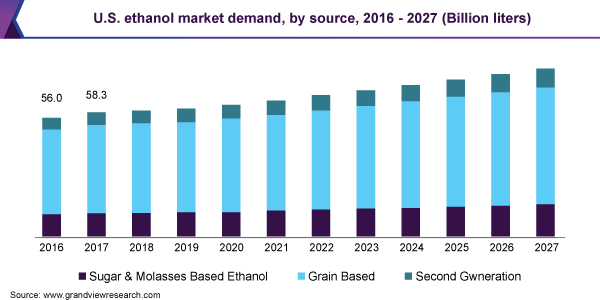 The U.S. is one of the major markets in North America. The robust petrochemical manufacturing base coupled with large areas under cultivation of corn and sugar favors the production of ethanol. The pandemic caused by the unprecedented spread of COVID-19 has brought forth new challenges for manufacturers in the country. Ethanol as a fuel is currently facing problems due to low demand. Consumption in beverages, disinfectant and personal care is at its peak and the trend is expected to continue for the next 2 to 3 years.

The application of ethanol as a biofuel is one of the major market drivers. The automotive industry has grown rapidly over the past years and has faced many problems to control air pollution. Ethanol is blended with gasoline up to concentrations of 10% and 15% to tackle the problem of rising air pollution caused by automobiles. The addition of ethanol provides major advantages in terms of improved fuel economy, increased thermal efficiency and helps in cold starts during the winter season. U.S. and Brazil are the countries that are leading the world, in terms of application of ethanol as biofuel.

Alcoholic beverages containing ethanol, which were earlier considered a premium offering are now slowly becoming an essential product that can be found in the majority of the households globally. The major trend fueling growth is entry of premium products in the marketplace. The rising disposable incomes coupled with increased knowledge about ingredients has fueled the demand for premium offerings. In 2019, the sales of premium alcoholic beverages grew at a rate of 5 to 6%.

Excess consumption of alcoholic beverages can cause a lot of damage to the human body, especially to the liver, which is an important organ as it helps remove toxins from the body. Long-term alcohol consumption increases the risk of chronic liver inflammation, which is commonly referred to as liver cirrhosis. The other adverse effects include loss of memory and lack of comprehension, delayed motor reactions, balance problems and ataxia, blurred vision, and sensation impairment. Rising awareness about these adverse effects may hamper the demand to some extent, thereby limiting market growth

In terms of volume, the grain-based segment led the global market in 2019 with a share of 67.3%. Easy availability of corn and maize and development of efficient technologies across the globe have boosted the segment growth. Grain-based ethanol is majorly manufactured using the dry milling process and 1 bushel of corn can produce 2.86 gallons of denatured ethanol. Corn production is expected to slow down globally as manufacturers tackle problems associated with yields and saturation in demand.

Sugar mills are now becoming one of the major avenues of ethanol production globally. Ethanol from molasses is being accepted globally and emerging countries are leading the race. The disinfectant and coalescing properties are driving the demand. The adoption of low-carbon fuel standards will propel the adoption of molasses feedstock for the synthesis of ethanol.

The major problem associated with the sugar and molasses feedstock is the limitations concerning production. Sugarcane is a seasonal crop and it cannot be used continuously for the production. Thus, manufacturers will look at this feedstock as a substitute in case the market remains undersupplied.

In terms of volume, denatured alcohol will be the fastest-growing segment with a CAGR of 3.7% from 2020 to 2027 owing to rising demand from the fuel and household chemicals industry. It can be combined with other chemicals to achieve the desired characteristics. It is majorly used in formulations used for cleaning and sanitizing indoor and outdoor environments.

Denatured alcohol is majorly derived from natural sources, such as corn starch and grains, making it suitable for household applications. Other major growth-driving factors include the rising awareness about indoor hygiene and the harmful effects associated with synthetic ingredients.

Undenatured ethanol is a product with a 95% concentration and does not contain any solvents and additives. It is majorly used in fuel blending and other industrial and research related applications. The industrial applications include detergents, adhesives, chemicals, inks, plastics, paints, and thinners.

Fuel and fuel additives was the largest segment with a market share of 43.2% of 2019. The rising demand for automotive fuel and changing regulations aimed at reducing air pollution are boosting the product demand as it is used in the manufacturing of gasoline additives to improve fuel efficiency. 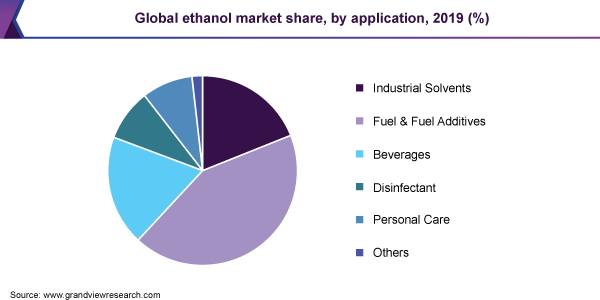 Industrial solvent is one of the steadily growing applications as it is widely used in major end-use industries. The rising demand from pharmaceuticals and paints and coatings industries is expected to positively impact the overall demand. The future growth in the application segment is largely dependent upon macroeconomic factors, such as government policies and federal bank provisions.

North America was the leading regional market in 2019 and held over 43% of the global share. The region is estimated to retain its leading position throughout the forecast years. However, Asia Pacific is estimated to register the fastest CAGR from 2020 to 2027 owing to growing fuel consumption and increased industrial activities. The presence of diverse industries in the region coupled with steadily growing economies is expected to positively impact market growth. The major application segments that are expected to drive the market in the region are fuel and industrial solvents.

Latin America is one of the largest regional markets due to the abundant availability of raw material coupled with rising product demand from the automotive industry. The changes in environmental regulations in the region are expected to have a positive impact on the consumption of ethanol in end-use industries.

Brazil is leading the Latin American market, in terms of product consumption. It was one of the first countries that experimented with the blending of ethanol into gasoline. Many automobile manufacturers in the country introduced modifications to accommodate the change. The country has increased tax on imported ethanol, which is expected to positively influence regional market growth.

Increased adoption of eco-friendly products is expected to provide new growth avenues for the market players. The recent developments in the global market have brought about changes in the value chain. Initially, manufacturers relied on 2 to 3 suppliers for the raw materials and there is a risk involved as contingency plans cannot always work out. Manufacturers are now looking at options to reduce the risk by acquiring stakes in raw material companies or by entering into forward agreements. Some of the prominent players in the ethanol market are:

Market analysis  has segmented the global ethanol market on the basis of source, purity, application, and region: