The Wild West of PPE – Don’t get scammed.

We are now well aware of the symptoms associated with Covid-19: fever, pains in the joints, sore throat. Another side effect that is less frequently described relates to Greed fueled by Fear!

In the last couple of months, it looks like all of the traders in the world have switched from selling coffee beans, shrimps, or any other commodities to selling gloves and masks!

The market is saturated with amateur traders who do not make the difference between kitchen gloves and medical gloves. It is undoubtedly annoying and lifts a veil of suspicion on any transaction. But more than that, the real plague is linked to fake buyers that will trick you in multi-trillion dollar deals!

This new breed of buyers will shield themselves behind fake cage codes, mostly black ones. For the record, there is no such thing as a black cage code that will promise you illimited access to Government funds. It just does not exists. Period

What is a CAGE Code?

What is the best way to bring stars in the eyes of any PPE broker? Just tell them you are acting on behalf of a company with a fully-funded Cage Code looking for a couple of trillion boxes of gloves and/or 1860 respirators.

Looks ridiculous? Just take the test, and you will see the result. But do you really know what a cage code is? Is this just the promise of a juicy IMFPA? Is this some kind of secret code that will open the doors of the White-House, DoD, and ultimately link your bank account to the Treasury Department?

Do you have doubts about a company claiming they hold a CAGE code? Just check the SAM database, the federal System for Award Management. All of the companies that hold a Cage Code are listed. If you don’t find your buyer there, this is a major red flag.

All the money in the world

WhatsApp was initially created as a social media platform allowing teenagers and young adults to stay connected and exchange nail varnish and bachelor party pictures. During the last couple of months, it looks like all of the money in the world is now being exchanged on this platform. My cell phone is full of LOIs and Purchase Orders totaling more than 10 trillion dollars, all sent on WhatsApp. Interestingly, most of the companies that issue these POs have only been incorporated a couple of months ago.

It looks like most of the PPE brokers have entirely lost the sense of reality. Here is a couple of figures to bring back a bit of context to these figures:

Do you still have doubts? All of the money in the world is not used to buy latex or nitrile gloves. Period!

Is the world covered with gloves?

Look around you! Is the world covered with gloves? It should be, at least according to the size of the lots currently being offered on the market. Recently, we saw the first Trillion OTG (On The Ground) Boxes of gloves. When asked if it has to be produced during the next 50 years or was real OTG, the broker responded in disdain, swearing on the head of his children that they have seen the Letter of Attestation, Proof of Life, visited the warehouse (s), and touched the holly boxes himself.

Fair enough, let’s make a quick calculation. If you assume that 5 billion boxes will require 200,000 containers, 1 trillion boxes will be a staggering 40 million containers! As of today, the biggest ship in the world can “only” carry 23,000 containers. I already hear you; this is production over numerous years; some are produced in the U.S and do not need to be shipped by sea.

I hear you loud and clear! You are not convinced. Just have a look at this fantastic visual representation of what represent various quantities of 1860 respirators. 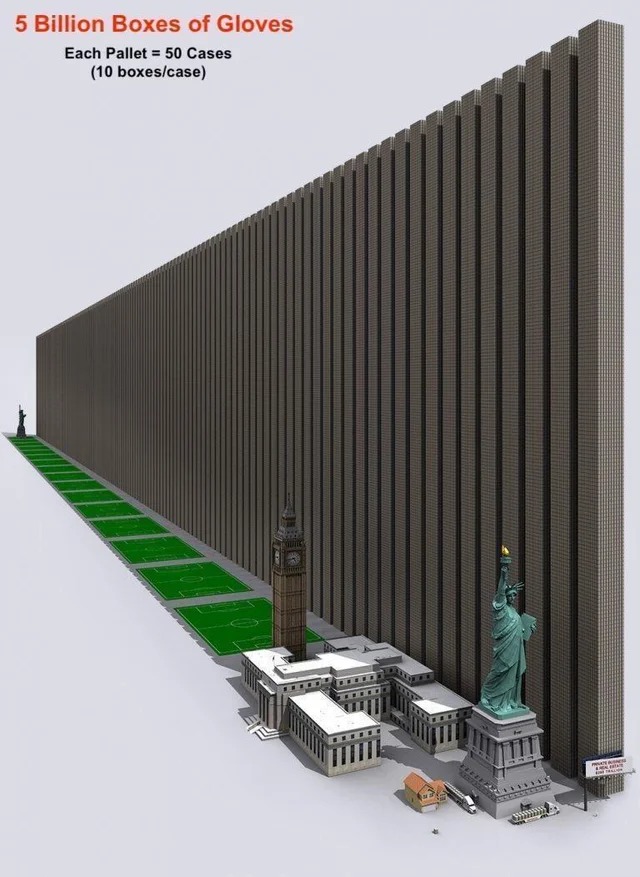 Such quantities of gloves will be bigger than the great wall of China.

Still not convinced? Let’s try something else!

As of today, there are 7.8 billion people on earth. We are talking roughly 15 billion of hands. One trillion boxes of gloves would be the equivalent of 6,666 pairs of gloves for every person on earth during the next 18 years if we ever had the idea to wear one pair of gloves every day.

From Tulips to Nitrile gloves: Haven’t we learned anything in 400 years?

Warren Buffet famously said: “What we learn from history is that people never learn from history.” Humanity doesn’t change! Fear and Greed are the two main drivers that shaped the history of the world. It was like that 400 years ago when the most valuable commodity was tulip bulbs. The 1637 tulipomania frenzy is very similar to what we see nowadays with nitrile gloves and 3M 1860 respirators.

Gloves are just becoming a commodity controlled by hedge funds in the hope of flipping their inventory at a profit in the shortest time possible. Just like tulips and the Internet Bubble, Nitrile Gloves and 3M respirators have now reached unsustainable levels. Two months ago, we struggled to find 100 million boxes, one month ago, the first billions OTG appeared, last week we saw trillion lots…few days back we heard quadrillion lots.

Psychologically, it means that the market operators are fully disconnected from reality…which is to be expected when buyers do not believe sellers, sellers do not trust buyers, and, lawyers and SGS reports are not even acting as a way to balance the market. The only positive point is that none of these fictitious transactions will ever close and that just dreams and time will be ultimately wasted chasing unicorns.

Follow the KISS principles to survive the PPE market another day

Are you the holder of a colorful Cage Code fully funded with a couple of trillion dollars looking to buy via a shell company founded one month ago on behalf of Bill and Melinda Gates Foundation, the White House, or the DoD? Well, we suggest that you call the President directly. You do have his private cell phone number, don’t you?

We, at 1WEC, are just reasonable people serving reasonable buy offers from federal / state, normal companies and hospitals that will ultimately buy gloves that will be used by ordinary people and healthcare professionals!

If you want to survive this industry another day…. follow these three Principles:

International Trading is a marathon and not a get rich quick scheme! If you want to survive this market, just take a deep breath, have a nap, and listen to Rudyard Kipling.